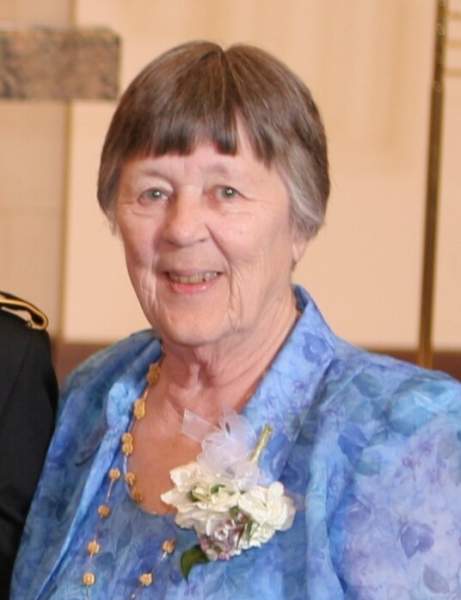 Carol Esther (Stoelting) Nicholson was born 30 August 1931, on her grandparents’ farm near Bristol, South Dakota, the third child of Edwin August and Rose Marie (Anderson) Stoelting. When Carol was four, the family moved to Schaller, Iowa, and a year later to Sac City, Iowa, where she attended school and graduated in 1949. She then went to business school in Omaha, Nebraska. To earn part of her tuition, she was a nanny for a family in Omaha. After graduating, her first job was at Merchants Biscuit Company, which later became Keebler. It was there that she met her husband, Robert “Bob” Nicholson. They were married on 28 March 1954 in Sac City. Daughters Tara Sue and Lori Ann was born in Omaha. The family then moved to Colorado Springs, Colorado, and from there to Woodward, Oklahoma, where son Bris Robert was born. He lived only three days. In May 1957, they moved to Ashland, Kansas, where daughters Jeri Lyn and Kira Lee and son Reid Alden were born. Reid lived one month and three days. Carol and Bob owned and operated the Ashland Nursing Home for many years. Later, Carol worked at Stockgrowers State Bank for 28 years, also working weekend nights at the nursing home. In retirement from the bank, she continued working weekends at the nursing home for a few years, housecleaning for local residents, and keeping busy with children and grandchildren. In 2016, she moved to Hutchinson, Kansas. Carol had many talents, including cooking, sewing, crocheting, and knitting. She was a very good mother, grandmother, great-grandmother, daughter, sister, and friend to many. Carol’s Christ-centered faith was very important to her. Her love of Jesus, her Lord and Savior, was exemplified by her devotion to family and friends and her service to others. Every Sunday, she and her daughters traveled 32 miles one-way to the Lutheran church in Buffalo, Oklahoma, because there was no Lutheran church in Ashland. She also made the same trip to see that her daughters completed confirmation classes. Carol was preceded in death by her parents, grandparents, sons Bris and Reid, brother and sister-in-law Kenneth and Jean Stoelting, sister Betsy Stoelting, brother-in-law Lyle Skinner, and the father of her children, Robert Nicholson.

Inurnment graveside committal, on Sunday, May 23, 2021 at 2:00 pm at the Highland Cemetery Ashland Kansas, under the direction of Wilkinson Funeral Service Ashland, Kansas 820 Main St. 67831

To send flowers to the family in memory of Carol Nicholson, please visit our flower store.