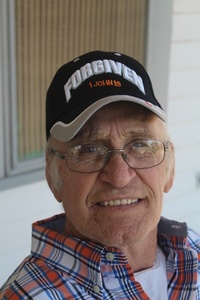 Lyle “Bud” Eugene Stoddard was born on April 1, 1938 in Osceola, Indiana to Cleland D. Stoddard and Mildred Marie (Breden).  Bud was one of eleven children. Bud’s mother died in 1945 when he was 7-years-of-age.  Bud was put in a foster home in the Indiana Orphanage.  On his 17 th birthday his dad and the State of Indiana signed him into the United States Air Force.  He spent his Boot Camp time at Sampson Air Force Base, New York, then was sent to Chanute Air Force Base, and then to Biggs Air Force Base, Texas, his first assignment, was trained to be a propeller mechanic while in Texas.  He went with a group of buddies to Truth or Consequences, New Mexico, 20 miles North of Biggs, where Bud met Rosetta (Rose) Lauer. They began dating for a while, then later engaged, the wedding date was set, at the First Baptist Church in Truth and Consequences, New Mexico on July 29, 1956.  Bud and Rose were sent to Tucson Arizona to Davis Monthan Air Force Base, for about a year and a half, then transferred to Robat Sale Air Force Base in Robat Marrocco for one year. Rose was not allowed to go. When Bud returned they were stationed at Donaldson Air Force Base in Greenville, South Carolina for almost two years, than sent to Savannah, Georgia to Hunter Air Force Base. After two years they went back to Chanute Air Force Base and Bud retrained in Weather Radar.  Bud was sent to Walker Air Force Base in Roswell, New Mexico, remaining there for about one and a half years, before transferring to Warren Air Force Base in Cheyenne, Wyoming.  He returned to Chanute Air Force Base for more schooling and received orders to Tan Son Nhat Air Force Base in Saigon, Vietnam for one year.  His final station was at Carswell Air Force Base in Fort Worth, Texas where he retired in 1975.  During his service and traveling Bud was blessed with his son, Shawn Lauer Stoddard, born in 1973 at Carswell Air Force Base Hospital in Fort Worth, Texas.  After retirement, Bud went to work as an Assistant Manager and Head Mechanic of Grand Prix of America Race Track, All Saints Hospital as a Biomedical Engineer, Parker Chiropractic Research Center as a manager of the Warehouse; then went to Medical Plaza Hospital in Fort Worth, Texas as a Biomedical Engineer until 1984, when he moved his family to Buffalo, Oklahoma to take care of Rose’s grandmother, Olive Lauer. While in Buffalo, he worked as a farm hand driving a tractor for Willard and Larry Loomis for several years and worked for Northwest Center for Behavioral Health before retiring with 14 years of service in 2010. After retirement he spent lots of his time in his woodworking shop; gardening; and doing his best job spoiling his three girls, Crystal and granddaughters Alexis, and Alana. Bud became ill in early 2012 with cancer and went to his eternal home after a massive heart attack on Sunday, September 1, 2013. Bud is preceded in death by his mother, father, and seven siblings, Danny, Cleland, Raymond, Geraldine, Opal, Jane, and Lois. Bud leaves as his survivors wife, Rosetta Stoddard; his son Shawn and wife Crystal Stoddard; his precious granddaughters Alexis and Alana Stoddard all of Buffalo, Oklahoma; his other son Josh and wife Amy Snider, and their children Cade and Caroline Snider all of Laverne, Oklahoma; His nephew Chester and wife Tammy White of Galina, Alaska; his sisters Deloris Ciesialka of Buffalo, Oklahoma, Ruth Bilinski of South Bend, Indiana, and Norma and husband Gary Moldin of White Pigeon, Michigan and many, many nieces, nephews, and many great friends.

Please click here to view the video tribute
To send flowers to the family in memory of Bud Stoddard, please visit our flower store.