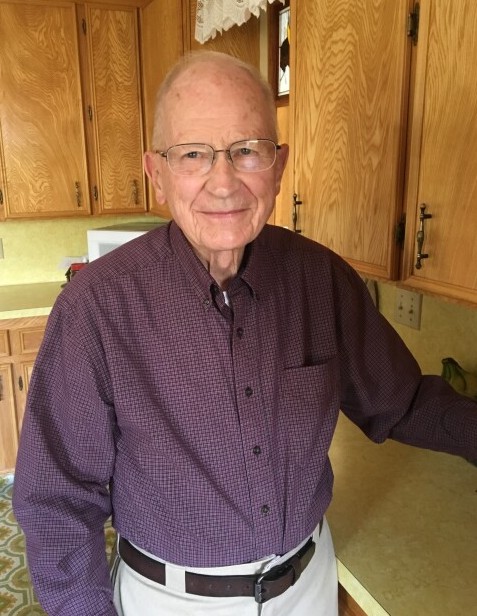 Robert (Bob) Austin Fellers was born on April 29, 1935 in Wichita, Kansas, he was the son of Francis (Jack) and Pauline (Cox) Fellers.  Bob and his family moved from Mullinville, Kansas to Ashland, Kansas in 1946, when he was 10 years old.  The family owned the Firestone Store until they purchased the Ford Agency from George McNickle in 1949.  Bob helped his Dad with the business from an early age.  Bob graduated from Ashland High School in 1953.  He excelled academically while playing on the basketball and football teams.  Bob graduated from Fort Hays State University in 1958, with a degree in Business.  Bob served in the Army after graduating from college.
Bob returned to Ashland to manage the Ford/Mercury Agency with his Dad.  Bob married Patricia Ann Peterson December 28, 1958, in Protection, Kansas.  They made their home in Ashland and were blessed with three sons; James Robert, Steven John, and Paul Andrew.
Bob was active in the business community for many years.  During that time many folks came by to visit him because of his genuine caring nature.  Bob endeavored to provide each customer with the best service possible.  Bob was a member of the Jaycees and the Kiwanis Club.  Bob served on the city council for many years.  Bob was a member of the Ashland United Methodist Church.  He enjoyed camping and taking care of his family.  Bob always put his family’s need above his own.
Bob was preceded in death by his parents, Jack and Pauline Fellers; cousin, Connie Green.  Bob left his earthly home on November 10, 2020 at the Ashland Senior Living.
Bob is survived by his wife Pat of the home, sons, Jim Fellers of Ashland, Kansas; Steve (Tammy) Fellers of Eldorado, Kansas; and Paul (Laura) Fellers of Lawrence, Kansas; brother, Tom (Phyllis) of Wichita, Kansas; four grandchildren, Heath Fellers of Austin, Texas; Hayley (Sam) McVay of Eldorado, Kansas; Alex Givotovsky of Cornwall, Connecticut; Nina Givotovsky of Des Moines, Iowa; three great granddaughters, Ellis, Emery, Eden, other family and friends, Bob will be missed by family and friends.

To send flowers to the family in memory of " Bob " Robert Fellers, please visit our flower store.

Family and Friends visitation from