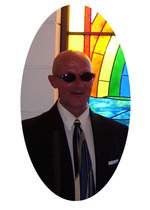 Bill was born at Ashland, Kansas on June 6, 1950 to William Everet and Neoma Joy Gaddis. He went to be with his Lord on April 9, 2011 at Brentwood Health Care in Dallas Texas. Bill grew up in the Buffalo, Oklahoma helping his parents and brother operate the Dairy Kreem. When the family was wrestling with whether or not to purchase the fast food restaurant, he said, “I can cook the burgers-we can do this.” The Gaddis Family owned and operated the Dairy Kreem for 21 years.
Bill graduated from Buffalo High School with the class of 1969. Bill was a member of the Buffalo FFA and involved in the Buffalo High School Play’s. Bill enjoyed playing jokes on people. In 1978, he graduated from Dallas Institute of Mortuary Science and practiced in Lubbock, Texas; Denver, Colorado and Dallas, Texas. The loss of vision shortened the career he loved. In his unplanned early retirement, he was an inspiration to family, acquaintances, and church family. During 2009 and 2010, he juggled his time between Dallas, Texas and Buffalo, Oklahoma, where he care for his mother for over a year, to delay her entry into Grace Living Center in Buffalo. Bill was saved and baptized at Greater Emmanuel Baptist Church in Dallas, Texas. His church family has been more precious than gold! Bill was preceded in death by his father, an infant brother Paul Dean, and his grandparents.
Survivors include his mother Neoma of Buffalo, Oklahoma, a brother Sam and wife Louise Gaddis and niece Joy and nephew Manoah all of Ardmore, Oklahoma, a host of church family, other relatives and friends.
A memorial service is scheduled for 11: 00 AM April 18, 2011 at the First Baptist Church, Buffalo, Oklahoma.
In lieu of flowers, the family has requested donations be made to cancer research or the Gideon’s International.

To send flowers to the family in memory of Bill Gaddis, please visit our flower store.