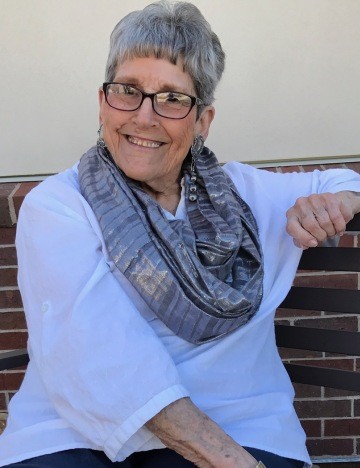 Betty Louise (Angelle) Salyer was born October 8, 1928 in San Antonio, Texas . Betty  moved with her family when she was 3 from San Antonio to Galveston Island, Texas.  Betty was the youngest of three children, Duval Angelle was her oldest sibling and Rose Marie Angelle was her older sister. Betty remained in Galveston through her Grade School Years and attended Ball High School in Galveston. After graduation from High School Betty attended Texas State Women’s College (now Texas Women’s University) in Denton, Texas. Betty graduated with a Bachelor of Science in Home Economics.
Betty moved to Ashland, Kansas after graduation, and was the Home Demonstration Agent for Southwest Kansas. Betty met Thomas Salyer on a blind date while attending college in Denton which was a part of the reason for the move to Ashland to work. The relationship blossomed.  Betty and Tom were married on November 23, 1950. Betty and Tom lived in Manhattan Kansas while Tom finished his degree in Agriculture Administration. They started their family on November 16, 1951 with the birth of Ronald Thomas Salyer. After graduation, the family moved back to Ashland and Betty was a proud housewife and homemaker as the family continued to grow with the birth of Charles Paul Salyer on January 15, 1953. Then Renee Marie Salyer was born July 1, 1955 and passed away July 3, 1955 from a underdeveloped lung condition. The next addition was Karen Angel (Salyer) Divine on October 8, 1956. Her 28 year old birthday present. In late 1956 Betty and Tom moved to Dodge City, Kansas as Tom became an insurance agent for Kansas Farm Bureau Insurance. After six months they moved to Spearville, Kansas and the family continued to grow with the birth of Matthew Garth Salyer on December 27, 1960. The final addition was Bradford John Salyer on October 28, 1968. Betty was 40 years and 20 days old at the time.
As a housewife and homemaker Betty was active in her community and could always be counted on to assist anytime she was asked and cooked some of the best fried chicken anyone could ever wrap their lips around as well as serve, coordinate, and clean up for events. Betty was the first to volunteer to be a Den Mother for the cub scouts program as it started in Spearville, Kansas. In addition to these activities Betty spent many evenings and weekends teaching any young woman who asked to make cakes and pies from scratch in her home.
In 1973, she and Tom moved back to Ashland as Tom got back into farming and ranching and Betty continued to raise the last three children. She was mom to many more children than just the five she raised because of her loving world famous hugs, hospitality, delicious snacks and personality.
In 1988 Betty went to work at the Ashland Floral Shop for Renee Duval and after nine months bought the business from Renee when she decided to move to Colorado Springs Colorado. Betty owned the Ashland Floral Shop for 13 years. After Betty sold the Flower Shop she went to work for D and B Pharmacy where she ran the register and continued to pass out hugs on demand, was always ready with a joke and an infectious laugh that would brighten anyone’s day. Betty continued to work for D and B part time until the last few months of her life.
Betty went to be with her mother, brother, sister, husband and the three children who preceded her in death on August 17, 2021. Betty was 92 years, 10 months and nine days old. With the loss of an infant daughter Renee at age 27, the loss of her oldest son Ron at age 61, the loss of her husband Tom at age 64 and the loss of Karen at age 87 plus the loss of her siblings and mother her faith in God never wavered and her love never stopped. She is an inspiration to us all.  Betty is survived by her son's Charles Paul Salyer, Matthew Salyer, and Bradford Salyer.

To send flowers to the family in memory of Betty Salyer, please visit our flower store.