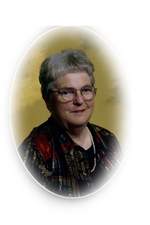 Minnie Arlene (Blaine) Terbush was born on July 9, 1936 in Lenora, Oklahoma to Marvin Otto and Pearl (Hart) Blaine. She went to be with her Lord and Savior the morning of March 16, 2013.

Arlene grew up on the Blaine family farm just north of Lenora.  She started to school in September of 1942 in a one room schoolhouse.  In November of that year, their farm house caught on fire and burned down.  After the fire, the Blaine family moved to Oklahoma City where their father worked for the Douglas Aircraft Plant.  Since it was during World War II, everyone in the family had to make adjustments.  One of the challenges the family of six had was living in a one bedroom duplex, especially after three more family members from Northwest Oklahoma joined them.   These times during the war years were memorable to Arlene.

When the war was over in 1945, the Blaine family moved back to Lenora.   She attended school there until it consolidated into the Taloga School district where she graduated in 1954. During high school, she held a class office every year.  After graduation, she attended Panhandle A & M College in Goodwell, Oklahoma.  While she was a student working in the cafeteria, she met her mate for life…Victor Terbush from Buffalo, Oklahoma.   He came through her lunch line and was so focused on getting her attention that he forgot to take his lunch tray.  As he was leaving, she read the back of his belt and yelled out, “Victor!”  He turned around, flashed his toothless smile…and the rest is history!

After knowing each other for only 6 months, Arlene and Victor were married on June, 4, 1955 at the Lenora Methodist Church.    After their wedding, the couple returned to college for Victor’s senior year.  Upon his graduation in 1956, he enlisted in the United States Navy Reserves.   Their first child, Janet Lynn, was born on June 20, 1956.  The family spent two years in Yoder, Kansas, where Victor was stationed at the Hutchison Naval Training Base.  During this time, their second child, Victor Leroy II, was born on March 30, 1958.

Upon his discharge, the family moved to “The Farm” located north of Rosston.  With 160 acres and a dairy barn, the Terbushes became Grade A dairy farmers from 1958-1972.  Arlene’s keen sense of humor was always present on the farm.  She would tease Victor that they should name their dairy, “Oleo Acres-The Cheaper Spread”.  After moving to the farm, they added two more children to their family.  Nancy Jean was born on June 12, 1962 and LuAnn Elaine was born on September 14, 1964 making their family complete.

Arlene loved being on the farm. “Working side by side” and doing the farm chores with Victor was her life.   Her greatest joy was time spent with her family.  She believed in raising her children in a loving Christian home, setting firm boundaries for them, and being consistent with enforcing those boundaries.   She claimed that by doing so, not only could she enjoy being with her children, but others could too. These types of values helped her earn Laverne’s Mother of the Year in 1972 and F.H.A. Farm Family of the Year in 1971. She was proud to take part in “Take Off Pounds Sensibly” (TOPS) and through her dedication she was able to meet and maintain her weight-loss goal to become a “Keep Off Pounds Sensibly” (KOPS) member.

Anything her children were involved in, she was right there to help. She was the Brownie/Girl Scout leader for the girls’ troop where she taught them to make “sit-upons” and macaroni jewelry boxes. She was Den Mother for Vic’s Cub/Boy Scout troop where she hosted cookouts making “hobo stew” and Dutch oven cherry cobbler. During their 4-H Club years, she helped them with their record books, talks and demonstrations and getting the animals ready to show. No matter what activity they were involved in, win or lose, she was their number one fan.

The Rosston United Methodist Church has always been an important part of her life, with her strong Christian faith being the center of it.  She faithfully read her Bible and it has been claimed, by her family, that the only person that knew the Bible better than “momma”, was Sarah Moore. She was a “Jack of all trades” around the church.  She taught various Sunday School classes, mostly children’s classes, Sunday School Treasurer, Recording Secretary, cleaned the church and was a member of the United Methodist Women. Arlene and Victor were the leaders of the MYF for years and started the tradition of delivering goody baskets and Christmas Caroling to the elderly of the church. She always enjoyed singing. Her favorite songs to sing along to were by Eddy Arnold. She was so happy and content with life that even when she couldn’t sing, she would sit and hum.

Arlene had several part time jobs. She worked at General Inc. in Laverne, the Harper County Assessor’s Office in Buffalo and was Officer In Charge-Postmaster for the Rosston Post Office. She always wanted to have a dog kennel and in 1996 her dream, “Paw Pals,” came true. And being a part time employee gave her the freedom to pursue her all-time favorite job… being Grandma.

She loved having her home filled with love and laughter, especially that of her ten grandchildren. She valued spending quality time with each grandchild whether it was playing a game, taking a walk down the lane to get the mail, or reading a book before nap time.  She was a master seamstress, sewing clothes for her kids and grandkids. She even made Raggedy Ann Dolls for the granddaughters.  One Christmas, Arlene and Victor handmade red & white western outfits with each grandchild’s name stenciled on their vests.   Each grandchild has their own special memories with Grandma. She led by example and instilled the importance of tradition to her family by providing many opportunities for family bonding. Like putting out the flags for Memorial day at Pleasant Ridge Cemetery since 1980, weenie roasts throughout the year and saying “the blessing” before every meal.

To send flowers to the family in memory of Arlene Terbush, please visit our flower store.