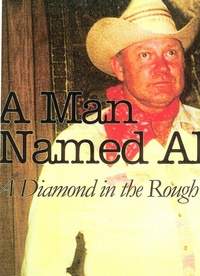 Alfred “Al” Lorance Nutter was born on August 29, 1928 to Henry and Letha (Johnson) Nutter, at Lookout, Oklahoma in a dugout house. Al was a sibling with 5 other brothers. Al, as small child, and was faced with many challenges. Al suffered with stuttering and shaking but overcame this disability through prayers and was granted this one of many miracles. At the age of 12, his family moved to a farm in Selman, Oklahoma. Al eventually took a job on the Swayze Ranch at the age of 14 in Coldwater, Kansas; where he stayed at the ranch. Al later worked on another ranch for Ansel and Norma Jean Dickerson for several years. Al did many different things from breaking horses, fixing the fences, building windmills, farming, and carpenter. Al also helped build the elevators in Wilmore and Coldwater, Kansas. Al loved friends and loved to tell his life story. Al & Edith Whitford of Protection, Ks. decided that his story was such an inspiration, that Al’s proudest moment was the day his book was published.   “A Man Name Al , A Diamond in a Rough”. Al was a member of the First Baptist Church of Ashland, Ks. but also enjoyed attending many other churches, to hear the gospel preached and see all of the people he knew. Alfred L Nutter went to his heavenly home on Wednesday, October 30, 2013 at the age of 85. Al was preceded in death by his parents and all 5 brothers; Clyde, Lloyd, Warren, Jimmy, Henry, and many friends. Al is survived by daughters, neices nephews other extended family and many friends. Al has requested no flowers all memorials maybe made to the Wilkinson Funeral Service P.O box 302 Buffalo, Ok. 73834.

To send flowers to the family in memory of Alfred Nutter, please visit our flower store.