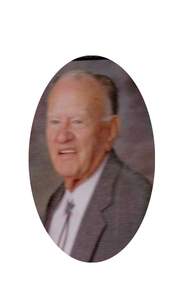 Elmore was born on December 29, 1912 on the family farm just north of Buffalo, Oklahoma to William Otis & Stella Mae (Hickman) LaMunyon. Elmore grew up on the farm, helping carry water from the creek to the washhouse so his mother could do the laundry and breaking wild horses with his older brother. As a young man, Elmore joined the Civilian Conservation Corps and saw duty in the Wichita Mountains building dams and others structures. Elmore married Eva Jaunita Fisher, December 23, 1936 in Buffalo, Oklahoma at the First Christian Church Parsonage and made their home at Hunter, Oklahoma. During this time two children were born Jaunita Louise and Wayne Elmore. Around the 1950’s the family moved northwest of Buffalo where they purchased a 160 acre farm in the Pleasant Valley community. Two more children were born on the farm, Linda Sue and Margie Lou. Elmore worked on the farm and took many other jobs over the years to provide for his family, operated a Phillips 66 service station in Buffalo and later worked in the Oilfield as a  roughneck, built oil lease roads, and did custom harvesting, all the while maintaining the family farm. He said “Farming was a great life; it just wasn’t always a good living”. Elmore and Eva moved to Buffalo in the early 1960’s but Elmore still operated the family farm until he retired. They enjoyed the Oklahoma Tornadoes Sam’s Square dance club; the Oklahoma Sam’s Club, and the Bison Square dance group. He enjoyed woodworking, playing golf, going fishing, and spending time with his many grandchildren. Elmore left this world on Monday 13, 2013 at Buffalo, Oklahoma, at the age of 100 years, 4 months, and 14 days.

Please click here to view the video tribute
To send flowers to the family in memory of A. Elmore LaMunyon, please visit our flower store.